A top climate summit organized by Arnold Schwarzenegger's environmental organization tooks place this week in my hometown Vienna. Swedish youth activist Greta Thunberg spoke at the opening of a failure by the leaders in attendance to act. She called on leaders to inform the public about climate change without sugarcoating "the biggest crisis humanity has ever faced." Most people have no clue about the scale of the climate emergency because they "have not been told, or more importantly, told by the right people," said Thunberg, who has inspired millions of young people across the globe to participate in the #FridaysForFuture school strikes.
People listen to, and are influenced by, politicians, celebrities, CEOs and journalists, giving them enormous responsibility, she told a top climate summit in the Austrian capital Vienna."And let's be honest, this is a responsibility most of you have failed to take," she told the high-level crowd. "We are humans… We are a part of nature. We are social animals. We are naturally drawn to our leaders."

I think, Greta is doing "a very good job" and she reaches a lot of people with her emotional speeches .. but to "change the world" it is also important to start in our own environment, for example, every Sunday in San Fernando. The "mercado agricola" (farmer´s market") offers a large and beautiful selection of products from the island, offered from the farmers, regional and - part of them - organic. Byuing at the market you can aviod large supply chains, and you buy directly by the person, who worked for it ;-)
The Second-Hand-Market offers a large selection of used products, which you can - maybe - use and give them a new life, in compliance of a responsable consumerism. 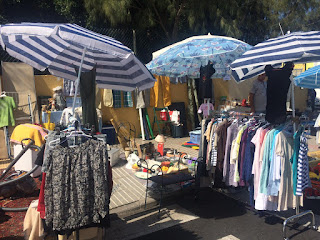